Wolverhampton Wanderers gained a hard fought point at home to champions Manchester City in the early Saturday kick off with a 1-1 draw.

Willy Boly scored the opening goal in the game early in the second half by directing Joao Moutinho’s cross beyond Ederson, despite replays showed he used his hand.

The opening goal seemed to give City a kick, who performed better since going behind. Not long after Wolves scored, City pulled one back through a Aymeric Laporte header, his first goal for the club.

Despite City not being at their best and Wolves being brilliant, Pep Guardiola’s side will be disheartened not to come away with three points, after hitting the woodwork three times in the match and forcing Patricio into some top saves.

The implementation of Video Assistant Referee

Last night, Bayern Munich were denied a goal via VAR in the Bundesliga curtain raiser. In Serie A last season, we saw VAR work effectively. La Liga and Ligue Un also have implemented VAR for the upcoming season.

Notice a pattern? Me too. Out of the so called ‘top five leagues’, the self-proclaimed ‘best league in the world’ does not have VAR. In fact, a two-thirds majority of Premier League clubs voted against VAR for the 18/19 season.

The truth of the matter is that the Premier League is outdated and quite frankly needs to move with the times.

Today, with VAR, Wolves’ opener would not have stood and Manchester City may have won a penalty, making the game very different.

This is not the first time referees have been questioned this season and it certainly will not be the last.

Yes, the technology has its faults. There is no mathematical formula on how to decide what is or is not a penalty. As we saw in the World Cup, the argument “well it takes the drama away” is false. If anything, it added to the drama.

In order to have fair games, it is a necessity and if the Premier League is to move with the times, it must implement VAR from next season.

Last week, many around the country hailed Benjamin Mendy as the best left back in the world. Going forward, they are not wrong – his overlapping runs and crosses are devastating and this was on full show against Huddersfield.

Part of the reason for this was the 3-5-2 shape that City employed in that fixture. Laporte’s cover on the left of a three man defence allowed Mendy to play as an auxiliary winger.

In a four, that is not the case.

Despite making a couple of vital tackles, interceptions and clearances today, the World Cup winner looked slightly suspect when Costa and later Traore ran at him.

This could leave Pep with a dilemma, especially in away games where his defenders will be put under pressure at any given opportunity.

Fabian Delph is a consistent, quiet, conservative option, should Pep have these thoughts.

Guardiola will have to weigh up his options, just as he does with other parts of his meticulous structure. When criticized for his ‘playing out from the back’ in his early days in England, the coach inspired by Cruyff admitted that it may cost them a few goals per season, but in the grand scheme of things, it will lead to them scoring more goals overall, so in the balance of proportions it will work well.

This is the same argument he may have with Mendy and Delph. Whilst Mendy may cost City a goal or two along the way, he will create more. 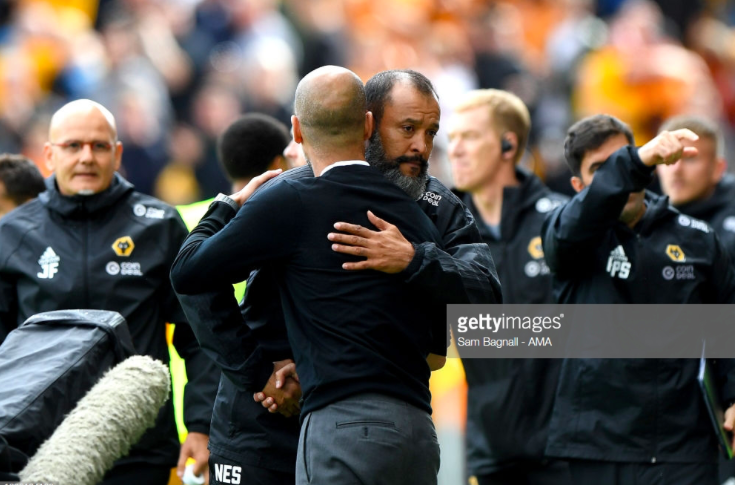 With more foreign managers moving to the Premier League, we have seen many new formations, including 3-4-3 or 3-5-2, made popular in this league by Antonio Conte’s Chelsea.

Wolves play a 3-4-3 system: a solid back three of capable central defenders, two wingbacks and defensively minded yet comfortable on the ball midfielders, with a traditional front three, who often cut inside and act as wide forwards.

This system seems to bring the best out of every player on the pitch for Wolves, whilst striking the perfect balance between defensive solidarity and attacking prowess, making it a fluid shape.

Rui Patricio’s first half save from the Sterling dipping effort is quite literally a save that wins you points – the sort you look back on at the end of the season. Despite some suspect distribution, Wolves’ #11 goalkeeper looked assured and made some top saves to deny the likes of Jesus and Aguero.

Willy Boly put in one of the best defensive performances you may see all season. He was commanding in the air, timed his tackles to perfection and used his tactical knowledge to cleverly intercept balls as Aguero looked sharp in the first half. The French defender scored the important first goal for the home side, despite using his hand. 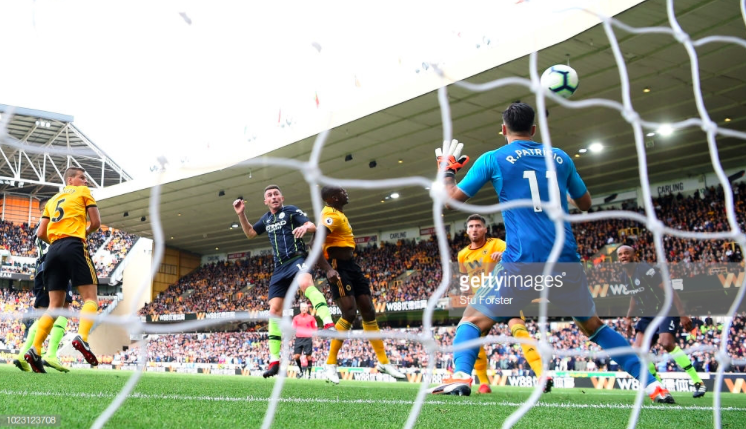 Aymeric Laporte is looking a great signing for City. Every attack started via the Basque defender and he looked solid in the duels as well. His first goal for City may be an important one, as City could’ve easily lost this game against a stubborn Wolves defence.

The same cannot be said of his partner Vincent Kompany, who looked nervous for a man of his experience. The early yellow card may not have helped, as the Belgian pulled out of a few tackles that saw Wolves players skip past him.