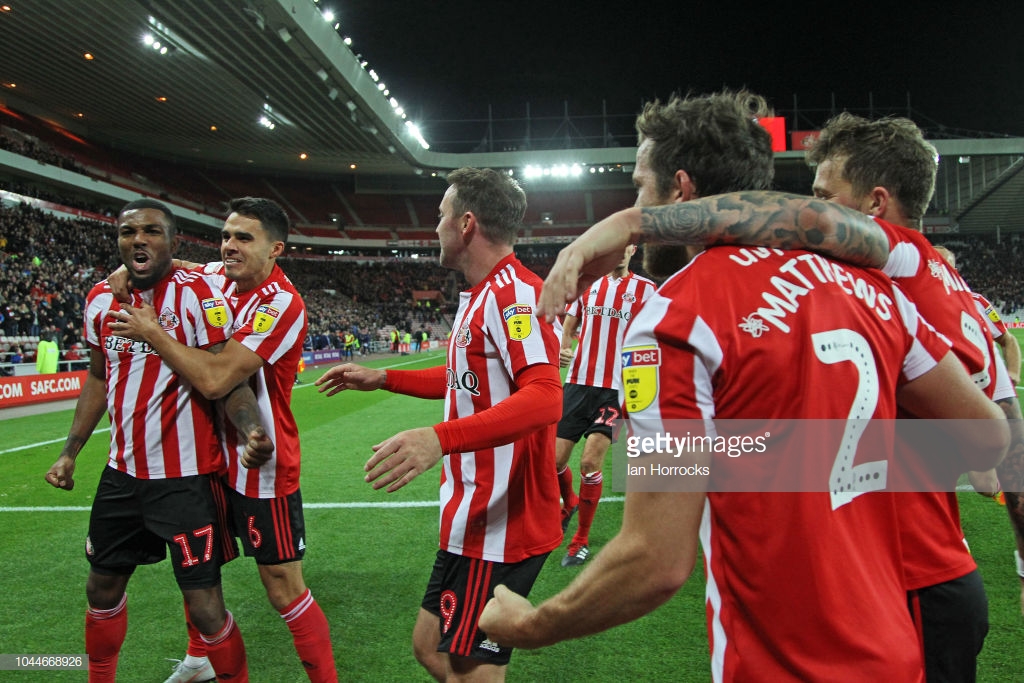 It was a quick turnaround for teams in the EFL as gameweek 11 was quickly upon us after Friday and Saturday’s action.

In true EFL fashion, you could never be quite sure of what was going to happen – with struggling sides trumping teams at the top, late drama aplenty and even a managerial sacking to boot, this is EFL Weekly.

Cabbages, dramatic comebacks and managerial casualties; it’s been quite the week for Aston Villa.

Heading into Tuesday night’s Villa Park meeting with struggling Preston, Steve Bruce’s team had suffered an indifferent start to the season, having recorded just one win from their last nine matches in all competitions.

That came at home to a Rotherham side still yet to pick up a point on their travels, but as referee Peter Bankes blew his whistle to signal the end of the first half against North End two weeks on, it appeared that the Villans luck may well be changing.

Bruce had enjoyed a 45-minute period which saw his side comfortably two goals up thanks to strikers Jonathan Kodjia and Tammy Abraham, but little did the 57-year-old know that was – almost typically – all about to change.

Centre half James Chester was sent off less than ten minutes into the second half, and Daniel Johnson scored from the spot to give the visitors a lifeline, and all of a sudden, doubt was creeping in at Villa Park once again.

Set piece specialist Paul Gallagher then curled a free-kick in to level things up, before turning provider for Louis Moult, who headed the veteran’s corner in four minutes from time to complete a remarkable comeback.

That sparked a huge display of discontent from the Villa faithful, with one fan even bizarrely throwing a cabbage at the home side’s under-fire manager; an incident that is now being investigated by police.

On the other hand, Alex Neil’s men seemed set to be on course for a vital three points that could have lifted them out of the drop zone, but little did the Lilywhites know that disaster would strike – not once, but twice – in stoppage time.

First, Everton loanee Yannick Bolasie levelled the match again after firing home a 91st minute equaliser, and then, right at the death, Johnson fouled Birkir Bjarnason in the box, giving Villa the chance to take the points after all.

The responsibility was left on the experienced shoulders of midfield general Glenn Whelan, but the Irishman’s low effort was brilliantly kept out by North End shot-stopper Chris Maxwell, diving away to his left, to make himself the hero of the night and earn his side a precious point.

But the disappointment didn’t stop there for Bruce, who was later sacked on Wednesday after overseeing a difficult start to the 2018-19 campaign. The search is on for bosses at Villa Park to find his replacement, but for now, the Midlands club find themselves in 13th and two points off the top six.

Elsewhere on Tuesday, Leeds and Middlesbrough both leapfrogged leaders West Bromwich Albion with 1-0 and 2-0 away wins at Hull and Ipswich, whilst Brentford failed to capitalise on a Maikel Kieftenbeld red card by drawing 1-1 at home to Birmingham – extending the Bees winless run to four matches, whilst the Blues are now unbeaten in seven, despite lingering down in 18th.

Stoke went to within two points of opponents Bolton by winning 2-0 at the bet365 Stadium, Queens Park Rangers pulled further clear of the bottom three with a 1-0 win at Reading, and Wigan played out a goalless draw with Swansea, as both sides missed out on the chance to claim a top six place.

Moving on to Wednesday, and there was more late drama involving a club from the West Midlands, as West Brom fought from two goals down to steal a point from South Yorkshire.

Albion could have returned to top spot in the Championship with a Hillsborough victory against Sheffield Wednesday, but found themselves two behind at the break after Fernando Forestieri’s strike was preceded by Adam Reach, who added to his collection of screamers.

The game seemed to be petering out, but two goals in a spectacular sixty seconds saw the Baggies level in the final five minutes, as first Joey Pelupessy put into his own net, and then youngster Harvey Barnes equalised with a stunning solo effort.

As a result, Darren Moore’s side drop below Leeds, Boro and Wednesday’s cross-city rivals Sheffield United, who continued their good form with a 2-0 win at Blackburn to go level on points with the top two.

Meanwhile, Norwich consolidated their playoff position despite seeing their five-match win streak in all competitions come to an end in a 1-1 draw at Derby, Nottingham Forest threw away a 2-0 lead to draw with Millwall in a game that was interrupted by floodlight failure at the City Ground, and the deadlock remained unbroken at the New York Stadium as Rotherham and Bristol City played out a goalless draw.

Accrington continued their fairy tale return to the third tier after almost sixty years by moving into the playoffs with a 1-0 home win over Doncaster.

It’s now three wins in a row for Stanley, who ended Rovers’ run of four straight victories, and John Coleman’s men remain unbeaten since an opening day defeat to Gillingham.

Offrande Zanzala was the hero in the 87th minute after the Congolese striker latched onto a Billy Kee through ball to slot in the winner and send the home side into the top six for the first time this season.

Doncaster remain third – a point above Stanley – and joining the pair in the playoffs are Barnsley – who could only draw at home to basement club Plymouth – and Sunderland, who played their part in an enthralling clash at the Stadium of Light.

Peterborough were the visitors and looking to regain top spot from Portsmouth, but had to settle for a point after a frantic, action-packed game.

19-year-old Josh Maja fired his team ahead in the first half with an eighth goal of the campaign, but as the Black Cats looked comfortable, disaster struck with a quarter of the contest to go.

Bryan Oviedo lashed out at Marcus Maddison and was consequently sent off, with Posh then taking full advantage six minutes later through substitute Joe Ward’s equaliser.

The visitors may have fancied their chances of finding a winner, but it was their hosts who retook the lead with just over ten minutes to go thanks to Jerome Sinclair’s first goal for the club.

But the drama didn’t stop there, and it was former Newcastle striker Ivan Toney who had the last laugh, scoring six minutes from the end to steal a point for a Peterborough side who were second best throughout.

Two points dropped for the travelling side mean Portsmouth extend their lead at the summit, as Ronan Curtis’ goal in first-half stoppage time secured a 1-0 win for Pompey at Coventry to maintain their unbeaten start.

At the bottom, there was a huge three points for Bradford as the Bantams claimed a narrow first win for new boss David Hopkin at AFC Wimbledon, which lifted them out of the drop zone.

Replacing City in the bottom four are Wycombe, who fought back to earn a point at Fleetwood in a 1-1 draw, whilst ten-man Oxford faced devastation as a 98th minute goal from Dan Potts condemned them to a 2-1 home defeat against Luton.

Elsewhere, there were goalless draws for Rochdale and Walsall at home to Bristol Rovers and Shrewsbury respectively, Southend came from behind to win 2-1 at Burton, and Scunthorpe made it three wins from four as the Iron beat Charlton 5-3 in the game of the night to boost their pursuit of the playoffs.

Lincoln’s lead at the top of the fourth tier was lessened as the Imps faced a shock 1-0 defeat at Tranmere.

The league’s leading scorer James Norwood bagged the game’s only goal on the hour with his eighth of the campaign, but went from hero to zero in stoppage time as he received a second yellow and was subsequently sent off.

It didn’t count for much as the hosts held out for a mightily impressive three points to jump five places into tenth, but there will be concern for manager Micky Mellon with his talismanic striker missing Saturday’s trip to Morecambe.

Newport, who started the night second, missed a glorious chance to go level on points at the top, but ultimately were more than happy with a point after a crazy game at Rodney Parade.

The Exiles hosted winless Macclesfield, but it was the Silkmen who astonishingly found themselves two goals to the good after just eleven minutes.

Fiacre Kelleher’s header was followed up by a David Fitzpatrick penalty, but County fought back through first Dan Butler and then Mickey Demetriou.

Macclesfield were awarded a second penalty with less than ten minutes remaining which captain Fitzpatrick again converted, but Newport snatched a draw at the death as Jamille Matt’s goal in the seventh minute of added time rounded off a pulsating finish.

It was a result neither side had hoped for, with the visitors remaining bottom of the EFL, and Mike Flynn’s team dropping into third as Exeter took full advantage with a 1-0 win at home to Stevenage, who went into the game sitting fourth.

Colchester and Forest Green, who also had playoff places to retain, did so in style with 3-1 wins against Yeovil and Cambridge, with the latter dropping into the relegation zone as visiting Rovers preserved their unbeaten record in 2018/19.

Oldham dropped out of the top seven after holding out to a goalless draw away to dominant Mansfield, whilst MK Dons leapfrogged the Latics with a comfortable 2-0 win at Port Vale.

At the bottom, Grimsby ended their run of six straight defeats with a vital 1-0 win at Carlisle that lifts the Mariners out of the bottom two – but only on goal difference – with Northampton making it three teams on eight points after goalless draw at home to play-off pushing Bury.

Just above them, Harry Kewell continued the revival at Notts County by making it four unbeaten and two wins in a row with a 3-1 home success over his former employers Crawley, who remain midtable.

And completing the round up are Cheltenham and Morecambe – who fought out an entertaining 2-2 draw at the Jonny-Rocks Stadium – and Crewe, as the Alex bounced back from Saturday’s defeat in Nottingham to beat Swindon 1-0 at Gresty Road.